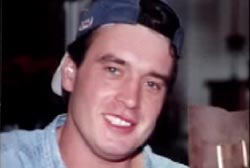 Blair Adams was an … um, interesting guy. If only we knew much more about him.

There are some rather unusual, freaky, unexplainable crimes that have been committed over the years, and Blair Adams’ case is one that is about as mysterious as they come – especially the way he died and the fact that the case has gone cold.

Was Blair Adams paranoid? Or did the person he thought was following him, find him and did exactly what he thought would happen? Or was this some rather random, bad-karma situation in the old Confederacy?

The real mystery was Blair Adams’ death, though the events leading up to it were quite mysterious in themselves – we have nothing to go on since the primary witness to his behavior is him – and he’s not with us anymore.

Adams was found in a parking lot a half-mile from a hotel in which was supposedly staying – though he hadn’t checked in yet – in Knoxville, Tenn.  The autopsy revealed that he died because of a punch to the gut so powerful that it ruptured his internal organs.

Adams, a Canadian, got to Knoxville through a drive from Seattle – though he bought a plane ticket to Washington D.C. while in Seattle. He got into Seattle through the Canadian border, though it was his second attempt, as he was turned away the first time when he arrived at the border crossing with a briefcase full of money and no other bags and whatever possessions he could stuff in his pockets.

He had cleaned out his bank accounts and his safe-deposit box in Canada prior to this journey, claiming that he needed to leave Canada because he thought someone was trying to kill him. After being turned away the first time, he went back home.

The next day, he quit his job and asked a friend to smuggle him into America, but only after he had bought a plane ticket to Germany but changed his mind. When his friend decided that being caught as a human smuggler was not her idea of fun, she refused to help him. Out of desperation, Adams got a rental car and was successful in crossing the U.S. border a second time, and then he committed to moving on from Seattle.

He drove to Tennessee – not sure why exactly, other than it wasn’t a straight-line trip, which means he was behaving as if he was being followed – and entered a gas station in Knoxville. There, witnesses said he told the attendant that he couldn’t start his car. Turned out that he had the wrong keys, but the car was able to be driven to that gas station. He hitchhiked to a hotel and paid for a room but never went to it. He immediately left the hotel upon paying the money, and then his dead body was found hours later in that parking lot a half-mile away – with his pants removed.

As far as we know, that is all we know about Adams’ death, and this was more than 20 years ago. Was he mentally disturbed and wound up with a self-fulfilling prophecy? It seems we may never know