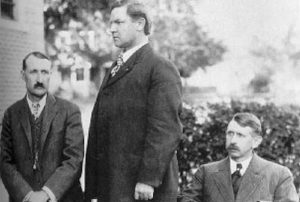 In order to fully understand the nature of this trial, let’s take a quick look at the circumstances leading up to it:

It begins in July of 1892 in Northern Idaho, during a worker’s strike of local miners because of their wages being reduced from 35 cents to only 30 cents. After discovering a company plant, angry union workers decide the best way to get their point across is to blow up a mill and hold captive non-union workers. Other union men commandeer a train and take over other mills in the area. The Governor of Idaho declares martial law and with the assistance of President Benjamin Harrison, the federal troops are sent in.

The Governor of Idaho declares martial law and with the assistance of President Benjamin Harrison, the federal troops are sent in. The Federal Troops arrest 600 union men and sympathizers where they are held with no charges and then released.  Union leaders are tried.

Tension like this continues over the next several years with more mining explosions more federal troops being sent it, with over 1000 union members and sympathizer being arrested as of 1899.

In the early 1900s, the violence continued; a train bombing killing non-union members and the governor of Idaho being blown to smithereens from a bomb planted in his home.

Now that we have some historical context, the next thing we must focus on is the investigation into the bombing of the governor of Idaho:

On December 31, 1905, a waitress from The Saratoga Hotel, remembers a visibly shaken Thomas Hogan after the explosion that killed the governor. A search of his hotel room shows traces of plaster of paris which was used to hold the bomb together. The next day Thomas Hogan (born Harry Orchard) is arrested for the murder of the governor.

The state of Idaho hires the best detective of the era James McParland. He meets with Orchard and offers a plea deal if he is willing to testify as to who hired him for the job.

After having a complete meltdown in prison on February 1, 1906, Orchard confesses to killing the governor as well as 17 other people on the behest of union members William Hayword, Charles Moyer and George Pettibone.

After some ridiculous shenanigans of getting William Hayword back to Idaho (he was Colorado hiding out but was found), on May 9, 1907, Hayword stood trial for the murder represented by the criminal defense lawyer Clarence Darrow and Edmund Richardson.

Hayword is found NOT GUILTY.

How could this be? There has been much debate amongst historians. Some believe that it was Clarence Darrow’s eloquence while other’s believe that it was the prosecution’s failure to provide any evidence to Orchard’s claims against Hayword. And remember the burden is on the prosecutor to prove without a reasonable doubt that Hayword was guilty of ordering the murder of the governor of Idaho.

Reports from all over the country reported on Darrow’s skilled defense and his team’s ability to countering the witness is cross-examination. One reporter even wrote, “the greatest trial in modern times.” And that is precisely why it’s on his our list.