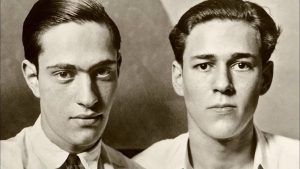 In order to fully understand the ramifications of this trial, first, we have to learn a little about the two key players – Nathan Leopold and Richard Loeb.

Nathan Leopold was a child prodigy with an intelligence of 210. He spoke 5 languages fluently and was a renowned ornithologist by the time he was 18 years old. Richard Loeb was also intelligent, skipping several grades and graduating University at the age of 17. But he was characterized as lazy and unmotivated.

This is important to note because Leopold and Loeb thought that their superior intelligence would allow them to plan and execute the perfect crime and not get caught. They were also both influenced by Nietzsche and his concept of the Ubermensch or Superman. The fact that they were intellectually superior to the common folk and their basic rules didn’t apply to them. They began testing this theory by a string of petty theft but no one noticed or cared. This is when they began to plan “their perfect crime” that would garner them media attention and catapult them into Superman status.

Leopold (then 19) and Loeb (then 18) somehow believed that kidnapping and murdering a young boy would be the perfect crime. They spent months planning every little detail from the method of abduction to the disposal of the body, to the delivery method of the money for the ransom as well as which chisel to buy to commit the murder.

Decided to murder Bobby Franks was easy as it was Loeb’s cousin and former tennis partner.

On May 21st, 1924 as Leopold and Loeb offered Franks a ride in a rented vehicle. Leopold drove and Loeb sat in the back seat with the chisel. Franks originally declined the invite but was convinced to get into the car after Loeb offered to discuss tennis rackets. Franks sat in the passenger seat and Loeb struck him in the head with the chisel several times. He then dragged him into the back seat, gagged him and Franks subsequently died. Then poured hydrochloric acid onto his face, body scar, and genitals to obscure any identification to the body, and dumped him in the culvert near the railroad in Hammond Indiana. By the time they arrived back to Chicago, there were already reports that Franks was missing. They made their first phone call to the Franks family saying a ransom note will be sent soon, then mailed their ransom note, burned Franks’s clothes and cleaned the blood off the rented car.

Then they poured hydrochloric acid onto his face, body scar, and genitals to obscure any identification to the body, and dumped him in the culvert near the railroad in Hammond Indiana. By the time they arrived back to Chicago, there were already reports that Franks was missing. They made their first phone call to the Franks family saying a ransom note will be sent soon, then mailed their ransom note, burned Franks’s clothes and cleaned the blood off the rented car.

The next morning they called a second time to dictate the first set of payment for ransom. This is where the plan fell apart. The intricate instructions were too confusing and a nervous family member forgot where he was supposed to go.

As this was happening, Franks’s body was found, and Leopold and Loeb knew their kidnapping charade was kaput. They destroyed the typewriter and went about their lives, as usual, thinking they committed the perfect crime.

As the investigation began, Loeb kept to himself where Leopold helped police and even offered to help. He even gave theories of what could have happened and was quoted saying “If I were to murder anybody, it would be just such a cocky little son of a bitch as Bobby Franks.”

Then things began to fall apart again. Found near the body was a pair of glasses. These glasses contained an unusual hinge mechanism that was quite expensive. Only three people in Chicago had purchased a pair of glasses such as these. One of which was Leopold. When confronted he said during a bird watching trip they must have fallen out of his pocket. But soon the destroyed typewriter was found by the police.

When questioned by police as to their whereabouts the night of the murder, they said they picked up two women and dropped them off by a golf course. However, their alibi was blown when Leopold’s chauffeur stated that the car was in the garage all night and being repaired.

Many people assumed that Darrow would go with a defense of not guilty by reason of insanity. Rather, he went for a guilty plea but ask the judge that rather than death penalty, to offer life in prison. Darrow’s speech during this trial is considered to be the highlight of his career with an overarching theme of inhumane methods and punishments of the American Justice system.

This 12-hour closing argument sparked a major reversal in America’s thinking about capital punishment and caused the overall number of executions performed in the country to decrease, which is why we believe that this is definitely one of the trials of the century.