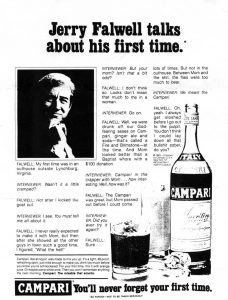 Nowadays, there are many debates sparked regarding the First Amendment and the appropriate use of free speech. That people have the right to say what they want, however they want, regardless of the circumstances. Sometimes, however, the line between what can be regarded as free speech and what is considered slander or libel can be muddied and smeared to a point of near-indistinction. In the case of Jerry Falwell vs. Larry Flynt, this is exactly what happened.

Reverend Falwell was a well-known champion against the pornography industry, claiming that the content was poisoning the minds of young people and tarnishing the purity of marital relationships by encouraging sex out of wedlock. He was an activist who founded the Moral Majority organization, established to spread a religious agenda that promoted religious practices in schools and spoke out against acts such as abortion and the spread of pornography.

Contrarily, Larry Flynt was regarded as the ruler of the pornographic world. His famous magazine, Hustler, was well-known throughout the country, delving from written articles on public and private opinion regarding the pornography industry into the pin-up starlet display that many of us know it to be today. And it was inside one particular issue of Hustler, in November 1983, that Flynt had published what many would argue to be a libelous article defaming the Reverend Falwell, falsely claiming an interest in incestuous relations with his own mother chief among other acts. Not surprisingly, Reverend Falwell took these matters to heart and called upon his campaign to fund a legal pursuit for damages to his reputation as well as emotional distress suffered as a result of the matter, calling it a mission to champion against the pornographic industry.

During the process of the trial, some might recall the fantastic deposition given by Mr. Flynt as he lay handcuffed to a gurney, in a state of apparent discomfort that suffered due to an attack on his person in Georgia years earlier. He seemed to mock the legal process with comments of incredible association such as collaborative efforts toward the ad targeting Falwell that involved the likes of Yoko Ono, Billy Idol, and even President Jimmy Carter. Other comments involved his blatant distaste for the Bible and organized religion as a whole, comments that involved exceedingly colorful language. Eventually, the deposition devolved into a series of personal attacks on Falwell’s attorney, Norman Roy Grutman. The entire process went over so poorly that Flynt’s attorney, Alan Isaacman, had to claim mental incompetence on the part of Flynt due to manic-depressive syndrome brought on by Flynt’s physical state combined with medication he was taking while in jail.

In December of 1984, Falwell appeared in court in Virginia. He described in detail the relationship with his mother and his steps with religion that had transformed him into the man he was – the “second-most admired man behind the President.” He described his personal vendetta against the pornographic industry before and especially after Hustler’s personal attack on him, telling about how he was so angry that he might have reacted physically if Flynt had been anywhere near him.

When Larry Flynt arrived in court, he appeared to be a man changed. Instead of being strapped to a gurney in prison garb, Flynt wore a three-piece suit. His expression was much calmer and composed than it had been during his deposition. He spoke more clearly and concisely, and he cited his reasons for publishing such an article as a reactionary piece to Falwell’s campaigning against his magazine and the industry as a whole. Flynt claimed he didn’t expect his readers to take any of it seriously due to the simple fact that it was so incredible to think a man such as Jerry Falwell could realistically engage in such activities, and that he didn’t even harbor any personal vendetta against Falwell despite the ad. In the end, the court awarded Falwell for damages due to emotional distress as well as punitive damages, though denied him the award for libel due simply to how fantastic and unbelievable the ad was.

After this point, supporters of Flynt’s right to free speech spoke out, and eventually, Isaacman called for a certiorari (effectively a review of proceedings from a higher court) to the United States Supreme Court. The case became one that centered heavily around the interpretation of the First Amendment. Isaacman argued in front of the Supreme Court the parallel between Flynt’s ad and such demonstrations as political cartoons that are a clear-cut case of satire and not necessarily an intended defamation on a targeted person. He argued the distinction between unpopular speech as opposed to a treatise on standards of decency and morality. Isaacman emphasized Falwell’s personal quest to combat the pornographic industry as detrimental to Flynt’s profession and livelihood, and that Flynt was only reacting with a parody to meet the threat of Falwell’s campaign. And while Grutman attempted to argue a “deliberate, malicious character assassination,” the Supreme Court appeared to side with Isaacman. Counterpoints included Justice Scalia comparing the event with “politicians depicted as horrible looking beasts,” and Chief Justice Rehnquist wrote following a unanimous decision toward the tune of emphasizing the protected right of Flynt to write such an article even out of malice regarding public figures. The Supreme Court reversed the jury’s award to Falwell, cementing the near-absolutism of free speech without fear of reprisal protected by the First Amendment.