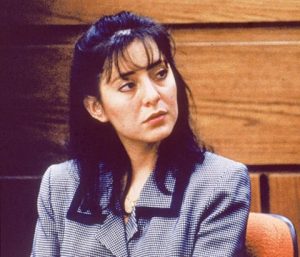 If social media existed in the early 1990s, this would have been a viral meme.

And a term would be in the current Urban Dictionary and would be used thousands of times, maybe even in contexts that don’t fit – but might be scary.

Guns are considered dangerous weapons, but not kitchen knives in the hands of a crossed woman?

You’d want the gun, if there was a chance that woman was as ticked off as Lorena Bobbitt. She became a verb in the English vernacular.

For those not in the know, Lorena Bobbitt was the husband of John Wayne Bobbitt in 1993, who infamously sliced off her husband’s – um, membership – while he slept in their home in Manassas, Virginia. Lorena had enough of John’s abuse, including a claim that he had raped her earlier that night while he was drunk.

After verbal, physical, emotional and sexual abuse through most of their marriage, Lorena finally had enough. She waited for John to fall asleep, then she went to the kitchen, grabbed a knife and cut off the entirety of John’s membership and took off in her car with it, finally throwing it into a nearby field.

A short time later, Lorena came to her sense and called 9-1-1, and authorities searched for the appendage and put John through more than 9 hours of surgery to re-attach it. John later appeared in an adult movie in an effort to prove that his membership was still functioning.

The trial in 1994 was a media circus and a ratings bonanza unlike any seen to that point (until the O.J. Simpson murder trial a year later), as many were glued to the reports about the details of the incident and the backstory. Lorena’s defense brought forth many witnesses to John’s character and his abusive nature toward Lorena, showing justification and a self-defense angle to what she did.

Lorena was found not guilty due to insanity, but she was put in the national media for weeks as a poster woman for victims of spousal abuse, and in some circles hailed as a hero or stepping up in favor for abuse victims who often don’t have a voice.

One of the legal issues that came to the fore as a result of the trial was the topic of spousal rape, whether it was a thing and the penalties for such a charge. There was a quick push across the country for spousal rape to be added to criminal codes as a charge related to, but separate from, domestic and sexual abuse.

For a while there, men were much more tentative around women who seemed weak but had an inners strength and passionate emotion that could drive them to do such an act. Men who seemed dominant suddenly were perceived as being equalized by a crossed woman and a kitchen utensil.

And it went to show how powerful the “fight or flight” instinct can be, even in those who are perceived as being too weak to have their own voice.

And it made some men afraid of going into their kitchens for a while.