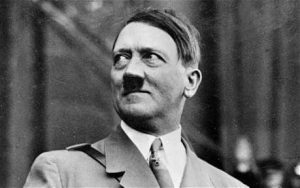 As far as prominent figures in history are concerned, very few are more compelling of a subject than Adolf Hitler. An extremely charismatic leader well known for restructuring the German government following World War I, there are many theories that still circulate and even new theories being developed today about Hitler: his motives, his secret life, and even his psychological evaluation. Some have even speculated that he is a serial killer of the most perverted kind. Literally.

Historical accounts have claimed that Hitler was so driven by the idea of killing that it had even aroused him sexually. One-time German actress Marianne Hoppe claimed in an interview to have witnessed him rubbing his knees together as he “got some kind of orgasm” during a viewing of “The Rebel” in Hitler’s Berlin palace. The film featured Austrian soldiers against French soldiers, the former killing the latter by throwing rocks down upon them. And while many might interpret this as sick and twisted in its own right, is it a fair assessment by itself to consider Hitler a serial killer?

First, to consider the definition of a serial killer – which, in itself, can be a difficult task. There are many elements that go into the definition of serial killing, these elements coming from different sources. The FBI, an agency that likely sees its fair share of serial killers, defines a serial killer as anyone who has committed at least three murders over a period greater than a month with an “emotional cooling off period in between.” Barring the interpretation of a cooling off period, it’s hard to imagine anyone might debate this stipulation. Whether Hitler was or was not directly involved in the countless lives lost during the Holocaust, it is almost impossible not to associate him with the deaths regardless, other it would be fraud. However, this is hardly the only definition provided to us that fills out what a serial killer is. The National Institute of Justice provides a bit more specific criteria before someone can be classified as such; they say that a person must commit at least two murders with a strong psychological motive and is generally associated with “sadistic sexual overtones.”

Of course, under the assumption that Hitler did hold a strong sexual urgency toward death to the point that it drove him to command others to kill, one could argue that he fulfilled this condition as well. However, others might make the argument that even this definition of serial killing is too specific and exclusive. Psychologists, for example, employ a concept called prototype theory in an attempt to classify people based on the most pertinent archetypes. In the case of serial killers, some of the more famed individuals that come to mind are Ted Bundy and the Zodiac Killer, who may or may not have killed under the pretense of sexual motivation. However, there was a very common thread that spooled through the victims of the previously mentioned figures. In the case of Hitler, the same could be argued in regard to the Nazi propaganda that called for the eradication of the Jewish people and the cultivation of the Aryan race. However, the proposition that Hitler may have also been motivated sexually throws an entirely new variable into the equation. So, now the question must be asked; is this the mark of a serial killer or just the general tendencies of a genocidal dictator?