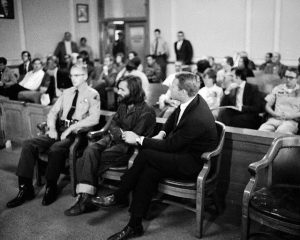 The Manson case gripped America like no other, in large part because everything about the family in question was fascinating from the very beginning. Charles Manson was reportedly sold by his mother for some beer in his early years. Eventually his uncle found him. One must wonder how much history could have changed if Manson had stayed in the arms of a woman who wanted children more than a pitcher of beer. Then again, Manson seemed worth giving up. Sadly, we’ll never know.

Charles grew up troubled, diagnosed with schizophrenia while exhibiting symptoms consistent with paranoid delusions. He was a control-freak, accustomed to manipulating people and circumstances in order to get his way. He spent time in facilities designed to rehabilitate delinquent youths, and then prison as well. But that was nothing compared with what was to come. In the late sixties, he moved to San Francisco and began recruiting. Him and his cult then moved to a ranch outside of Chatsworth.

Before his release from prison, he had spent most of his life behind bars of a sort–and he had asked permission to stay, suggesting there was no potential for him to adapt outside of prison walls. It turns out they should have honored his request.

Manson almost had a career in the music industry, but was turned down. When he didn’t get his way, he appears to have ordered his followers to slaughter a group of seven people connected–some, very loosely–to the man who denied him the opportunity to make music. Out of all those killed, the death of actress Sharon Tate caused the greatest stir.

When Manson first entered a courtroom to answer charges of murder, he had carved the letter “X” into his forehead. Later on while serving his inevitable sentence, he would have a swastika inked in its spot. Although he did have an attorney during the trial, he mostly defended himself. One of his followers, Kasabian, was rewarded with immunity for testifying against the rest of the Manson family. Although she did not commit a murder for Manson, she did accompany the rest in order to serve as a lookout while five people were slaughtered.

In January 1971, a jury took ten days to find each of the defendants guilty, and several of the Manson family were sentenced to death. The trial itself lasted seven months.

Having ordered the death of a pregnant woman–something seen akin to child molestation to those serving time in prison–it’s a shock that Manson has survived all these years. At least one failed attempt that we know about was made on his life.

Although Manson was originally sentenced to die and would have never received the opportunity for parole, the death sentence was abolished in the state of California, forcing the state to adjust his sentencing. This odd loophole allowed him to seek parole only seven years after his incarceration, and he has since had parole rejected twelve times. Although a couple of his followers had favorable parole hearings within the last decade, the push to approve these cases was denied by the governors who were serving at the time. As of now, Manson’s parole board hearings have gone so poorly that he will not be allowed to petition again until 2027 when he will have reached age 92.

He will almost certainly never see the light of day outside of a prison, and his current health is in question.