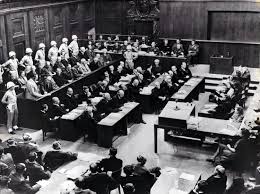 In Germany, the Nazi party held an annual rally in Nuremberg before the beginning of World War II. Many of the laws proposed and instituted during these rallies targeted Jews as a part of fundamental Nazi ideology, and they helped pave the way for the Holocaust to slowly unfold over the next decade. Many of the “Nuremberg Laws”–as they would come to be known–prevented anyone with Jewish blood from obtaining citizenship in the Reich, and made sexual relations between Jews and “pure-blooded” Germans a criminal offense. Over time, those of Jewish background all but lost most of the rights we hold universal and self-evident today.

It is only fitting then, that the trials which would crush Nazi war criminals under the fist of justice would take place in Nuremberg. They were carried out from the end of the war in 1945 until 1949 and were aptly named the Nuremberg Trials. The defendants of this trial were mostly former higher-ups in the Nazi party, including military officers, doctors, lawyers, industrialists, etc.

These trials were not only significant in their scope, but also because they were a cornerstone for the international laws that would eventually be drafted in order to prevent a recurrence of the atrocities of the Holocaust, most of which have persisted until today. They helped humanity recognize how these atrocities can occur, and who can legally be held accountable. In addition, it was only because of the Nuremberg Trials that an eventual international court was finally established in order to deal with proposed injustices as they occur throughout the world.

For many, these changes did not happen fast enough to make a difference.

It was not until December of 1942 that Allied leaders acknowledged the slaughter of the Jewish peoples who had resided throughout Europe at the time of Germany’s invasion–long, long after they already knew. It was at this time that they made public their intent to prosecute those responsible for the proposed crimes against humanity.

Perhaps a surprise to no one, Joseph Stalin suggested that up to 100,000 German officers be executed. Even Winston Churchill tossed about the idea of summarily executing certain members of the Nazi party. American leaders rejected these ideas outright, although probably not for the reasons we might invoke today. Instead, they believed the best way to avoid scrutiny of the executions in the future was to try those whose guilt was already certain. That way, evidence could be collected and cataloged for future generations who might otherwise judge those who put the men to death as equally guilty.

Although there was a precedent for trying military officers and political leaders for war crimes on a much smaller scale in regional conflicts that occur in one country or another, there were certainly no precedents available for trying such a great number of people accused of international crimes against humanity. The London Charter of the International Military Tribunal (IMT) helped draft the laws which would then govern the Nuremberg Trials. This charter helped categorize crimes based on what occurred. If you violated a peace treaty, you could be charged with a crime against peace. If you violated already-established customs or laws that typically govern war, you could be charged with a war crime. If you were guilty of murder, you could be charged with a crime against humanity.

These first steps were those that inspired the Geneva Conventions that we still use to govern international law today–and hopefully will into the future.