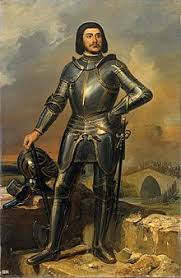 There’s just something special about the Middle Ages. Everything was grittier, darker, and more fantastical than it is today (even if the media would have us think differently). Gilles de Rais was a knight, a lord, and a companion to the famous Joan of Arc during the Hundred Years’ War. Sounds like a chaste guy, right? Oh, but he also enjoyed murdering children. In fact he enjoyed it so very much that he perhaps disposed of hundreds. An interesting fellow, to be sure.

From at least 1432 until 1440, a string of murders took place. They stopped when Gilles was found guilty, condemned to death, and sent to the gallows.

Gilles may have known something of the ancient Roman festival called Saturnalia. It was during this week-long celebration that a common subject was chosen from among the masses to be feasted with food and drink, to be pampered and loved. At the end of the joyous occasion, the subject was butchered as a representation of gluttonous evil overcome by the forces of good.

This is precisely how Gilles de Rais killed his victims. He would provide his intended victim with wonderful new garments, then a feast complete with copious amounts of alcohol. It was only then that Rais brought the victim to a kill room and took care of his baser desires by pleasuring himself. He would sexually assault the victim before the murder was completed.

The victims were routinely tortured. They were sometimes decapitated or dismembered. Other times their throats were cut or their necks were broken. Those who bore witness to these terrible crimes against humanity testified that Rais took immense pleasure in the pain he inflicted upon the children, and he also enjoyed the sight of their internal organs after they were dead.

Rais was only discovered after he kidnapped a cleric. An investigation was put forth by the Bishop of Nantes, and it didn’t take very long before Rais was found out. He was charged with murder, sodomy, and heresy. The court planned to torture Rais into confessing his sins, but Rais ruined the fun by confessing all on his own.

Most of the victims’ bodies were burned, but a grave of at least 40 was found. The total number of murders is thought to be between 80 and 200, making him perhaps one of the greatest serial killers of all time. His body was, perhaps quite fittingly, burned after his execution.

Then again, there are a number of counter-arguments and theories that claim Gilles de Rais was likely innocent of the crimes, and subject to a plot with ulterior motives.