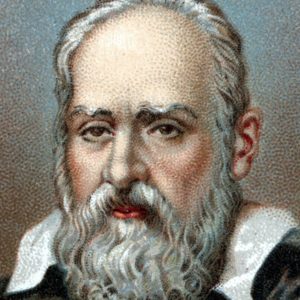 Galileo was born in 1564 and lived to the ripe old age of 77, when he died in 1642. That’s pretty good, under the circumstances. Today he is famous for having hypothesized many of the scientific principles and realities that we take for granted–such as the super silly notion that the planets revolve around the sun instead of around the earth (the former concept is known as heliocentrism, and the incorrect latter concept known as geocentrism). Although he was eventually proven partially correct, the scientific minds of the time period were compelled in a large part by religion. Heliocentrism contradicted Scripture. If you contradict God, then you’re considered a heretic, and so to trial he went.

Galileo quickly discovered much in astronomy that led to controversy. During the time period, there weren’t many who could force people to question their place in the cosmos, but Galileo was such a man. He discovered mountainous terrain on the moon and satellites revolving around Jupiter. He discovered sunspots and the phases of Venus. He discovered nebulae, even though he couldn’t begin to conceive what they were. Although his newly-founded views of the universe were frowned upon, he persisted.

The Roman Catholic Church had already lended its support to scientists and astronomers such as Aristotle and Ptolemy, and so the rift had begun. Although Jesuits first disagreed with Galileo’s findings, they eventually concluded the same after observing the phenomena for themselves. Many of those who refused to accept Galileo’s contributions to the field of astronomy purportedly never even bothered to look through a telescope in order to see for themselves. Then again, we experience a lot of the same type of skeptics today in even more important areas of science.

Certain high-ranking members of the Catholic church were called upon to offer their opinions on the Galileo problem. One decided that heliocentrism needn’t remain an issue as long as it was considered only in theory or hypothesis, and not in reality. When Galileo would not relent to those who disputed his findings, he was asked to provide conclusions based on physics and mathematics. He initially refused, but eventually provided a number of such conclusions. The church refused to listen to his reasoning.

An inquisition was formed on February 19, 1616 in order to discuss the reality of a heliocentric view of the universe. When this viewpoint was determined to be theologically absurd, he was ordered to essentially cease and desist, or else stronger measures would be forced upon him.

After a long period of back and forth between supporters and opponents, he was eventually ordered to stand trial in 1633. He was found guilty of heresy on June 22 of the same year. At first he was sentenced to imprisonment, but this was changed to house arrest. He died at home in Italy. As a result of the proceedings, many of his publications were banned for a time.

Galileo’s observation of heliocentrism suggested the sun was the center of the universe, which we now know to be untrue. It’s simply the center of one solar system in a single galaxy within the massive observable universe we know about today.