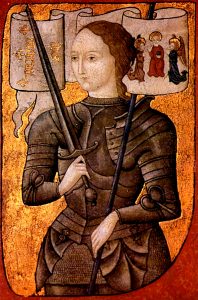 We grow up learning about the Middle Ages–or more specifically how little we know about the years from about 500 to 1500 A.D. Toward the end of this fairly interesting time period was a figure known as Joan of Arc, a young French heroine who participated in the Hundred Years’ War and has gone down in history as a saint. She grew up a peasant and, according to her, she heard visions from the Archangel Michael and a couple of saints, all of whom urged her to lend aid to Charles VII.

She fought against the English rule over France, and eventually, the French Charles VII was indeed crowned king. Unfortunately, Joan of Arc was caught by English allies in 1430 and burned at the stake just over a year later. Do you know the reason?

Before she was executed by the English, however, there was a short trial. We have very detailed records–even during this somewhat “dark” time period–because notaries were directed to take copious notes during the trial. These notes were published some years later and copied repeatedly. Now they are a part of history. And have come in handy for several defense attorney and lawyers everywhere.

Joan’s life was examined as thoroughly as possible so the English could deride her character, but their efforts were mostly in vain. Her virginity was examined (and found to be intact). Her home, upbringing, and social status were all investigated relentlessly. Those conducting the preliminary inquiries found nothing that would be helpful at trial, and so these efforts were essentially wasted.

During an interrogation that took place before the first trial date, her method of dressing was immediately frowned upon. She dressed as a soldier, with her clothing tied together in a single piece. She explained to those who interrogated her that it was to prevent rape. During the first court appearance, she said that she could make no guarantee of the truth of her answers because she had no idea on which subjects she would be questioned. she was asked to recite certain prayers, but she responded by demanding to be heard in confession in exchange for the recitation.

During the proceedings, she was repeatedly accused of heresy and asked to renounce all the visions she experienced which led her to fight against the English in order to crown Charles VII. She was also asked to give up her soldier’s clothing, even though she knew the consequences. Although she decided to sign an abjuration at first, she “recanted” only days later, and again wore the clothing which she had sworn to give up. Then again, she was given no choice. The guards provided her with only the clothing she had already been wearing, even after she argued that she should be given something else to wear because she had signed the abjuration.

This forced “relapse” into heresy provided the English court all the justification it required to have her executed on May 30, 1431.

Although Joan of Arc died at the hands of the English at the young age of nineteen, she was pronounced innocent by Pope Callixtus III shortly thereafter in 1456. He said she was a martyr. Napoleon Bonaparte later declared her a national symbol of France in 1803.