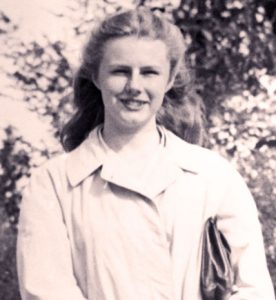 There’s the old adage that “life was simple back then”. And perhaps that is the truth because many teenagers thought that hiking through the woods in Vermont would be a good idea.

After working a double shift at the campus’s dining hall, 18-year-old Paula Jean told her roommate, “I am all through with studies; I’m taking a long walk.” It was a chilly afternoon in December of 1946.

Dressed in her signature red parka coat with the fur lined hood and blue jeans, Paula embarked on Vermont’s Long Trail, a 272-mile trail that goes from Massachusettes to Canada.

Here’s what we do know: a girl who matched Paula’s description was spotted by Danny Fager at a gas station near the college around 2:45 pm (when Paula left her room).

A girl who matched Paula’s description was spotted by Danny Fager at a gas station near the college gates around the same time that Paula left the school.

Fifteen minutes later, a man named Louis Knapp picked up a hitchhiker near the college on Route 67A that also matched Paula’s description. He dropped her off on Route 9 near The Long Trail.

Around 4 pm, Paula was spotted in Bickford Hollow. One man recalled seeing her without her red parka and told her that it was too cold to hike without the appropriate gear.

She was never heard from again.

The next morning, her roommate telephoned her parents if she had somehow gone home that evening back to Connecticut. This was not the case. The father organized a massive search party with no luck. Local investigator offered a $5,000 award.

Days passed with no luck. A few leads that were not reliable came in including a waitress who claims that served dinner to someone fitting Paula’s description in Massachusetts. Here’s where it gets weird: Paula’s Dad believed this woman and flew all the way to investigate the lead. He mysteriously disappeared for 3 days until he showed back up in Vermont having “not found anything.” Some people believe that Paula’s dad is somehow connected to here disappearance.

Here’s where it gets weird: Paula’s Dad believed this woman and flew all the way to investigate the lead. He mysteriously disappeared for 36 hours until he showed back up in Vermont having “not found anything.” Some people believe that Paula’s dad is somehow connected to her disappearance.

As time progresses more facts came to light. Paula had a boyfriend who her father did not approve of. Paula and her father had a huge falling out over it and weren’t on speaking terms. Some speculated that this boyfriend must be the guilty party despite their being no proof (other than a fortune teller saying so).

About 9 years later, in 1956, a lumberjack came forward, claiming to know where Paula’s body was buried. But after being questioned, he said he made it up for his 15 minutes of fame. But in 1968, almost 22 years later, a skeleton was found. But after some testing, it was revealed the skeleton did not belong to Paula.

As of this day in 2017, this is still considered an active cold case.